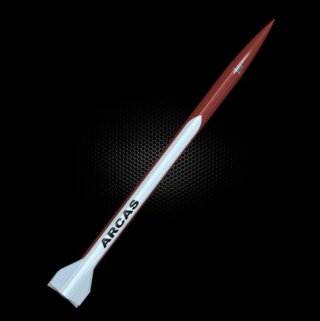 The L3 certification is the highest level of certification that the NAR offers, and it allows a flyer to fly M-O impulse motors. For my L3 project, I will fly a full-scale HV Arcas on an AeroTech M650W to an estimated altitute of 14,000 ft. The Arcas is 4.5” in diameter, 7.5 ft tall, weighs 30.3 lbs (with motor) and is configured with a 75mm motor mount tube. This rocket is a 1:1 full-scale model of the Arcas sounding rocket

In addition to the two flight computers described above, the Arcas will have a Raspberry Pi Zero W with an accelerometer, bme280 pressure/temperature sensor, and camera. This computer is “optional” and will have no control over the flight. This eliminates any risk to the flight. It was added since the purpose of the original Arcas was to gather weather data. It is also used to assist in the ground testing of the EasyMini.

The major components of the Arcas are as follows:

See below for the figures referenced.

The Arcas was constructed as follows:

The following images document the construction of the Arcas. Each image is numbered to correspond with the Figure number referenced above.

As required for safety and the L3 certification process, the Arcas is equipped with redundant dual-deploy flight computers.

All shock cords are attached to the rocket by 3/8” quick links attached to 3/8” eyebolts.

The drogue is housed in the booster section of the rocket, between the motor casing and the e-bay. The main is housed in the forward payload section between the e-bay and nose cone. 4-40 shear pins are used to attach the booster to the e-bay and the nose cone to the forward payload bay. To protect against hot ejection charge gasses, the drogue comes in a nomex/kevlar wrap and will be further wrapped in a nomex blanket with the shock cord. The main will be in a deployment bag, and the corresponding shock cord will be wrapped in a nomex blanket.

On the test flight (K1275R), a 9’ RocketMan parachute was used. The descent rate was recorded by the EasyMini as 28fps. While the rocket was not damaged, this is too fast. A bigger parachute is not an option, since there is not much room in the forward payload bay, so a more efficient one will be used instead.

An 8’ RocketMan High Efficiency (coefficient of drag is 2.2 instead of 0.9) will be used. Per the manufacturer, it is rated 29.8lbs at 15fps. The rocket will weigh 23lbs after motor burnout, so there is some margin of error. The rocket should descend around 15fps. 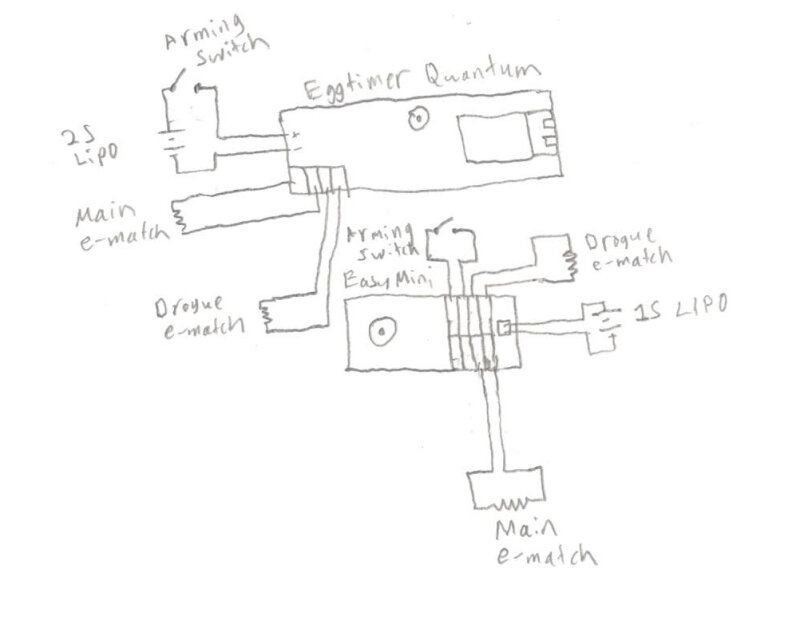 Both the EasyMini and the EggTimer Quantum were extensively tested prior to use on the Arcas.

The center of pressure was calculated by OpenRocket to be at 74.9 inches from the tip of the nose cone. It is permanently marked on the rocket. See below for the OpenRocket file, and see the above diagram.

65.7in from the nose cone (OpenRocket)

The below data was obtained from the OpenRocket Simulation.